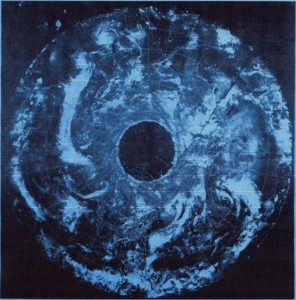 Photo: Taken in 1969 by the ESSA 7 satellite, this controversial composite, first published by pioneer ufologist Ray Palmer on the cover of Flying Saucer Magazine has never been satisfactory explained. CREDIT NASA (Public Domain)

Over the years I have pointed out several major establishment scientific findings that fit into the 1913 Hollow Earth Theory put forth by Marshall B. Gardner as good as, if not  better than, the ever-changing establishment Theory of the make-up of our world.

Some of the “Hollow Earth Science” findings are Huge Mountains, Valleys found in Depths of the Earth, (Inner Lands)  Earth’s Core Spinning Faster than Crust (Inner Sun),  Polar fountains fill magnetosphere with ions, (Fountains flowing OUT) 2 Other Layers Reported Around the Earth’s Core 1,800 Miles Down and Oxygen. . . EDITOR

Jeanna Bryner
Date: 01 October 2007 Time: 04:38 AM ET
A mineral that acts like a sponge beneath Earth’s surface stores more oxygen than expected, keeping our planet from becoming dry and inhospitable like Mars.

The key to the abundant oxygen storage is the mineral majorite, which exists deep below Earth’s surface in the mantle. Without the oxygen stockpile, Earth would probably be a barren planet hostile to life, authors of a study suggest in the Sept. 27 issue of the journalNature.

The researchers examined majorite in the lab under conditions mimicking the Earth’s deep interior and also near the planet’s surface. The results showed that under deep-Earth conditions of high temperature and pressure, majorite stores large amounts of oxygen. When the temperature and pressure were decreased, as occurs near Earth’s surface, the majorite decomposed and released the oxygen.

This film presents the history, mythology & folklore that the earth has a hollow realm, a mystical and physical place of great mystery and wonder. The hollow earth theory is represented in the history of many diverse cultures throughout the world. The Avalon of Camelot, the Garden of Eden, Paradise Lost, Shangri-La and Valhalla are names assigned to a mystical and physical place thought by some to house prehistoric animals and plants and by others to hide alien beings bent on conquering the outer Earth. . . . Text Posted with video at youtube

EDITOR’s NOTE: I have proven through personal research beyond a shadow of doubt that the so-called “Missing Diary of Admiral Richard E. Byrd” is a plagiarized fake. You can read my EXCLUSIVE Research Report here. And the proposed flight “beyond the poles” talked about in this video never happened. They were never able to secure the funds. . . EDITOR