Roots of the Controllers # 5: The Illuminati and the Council on Foreign Relations by Myron Fagan (Full Documentary) 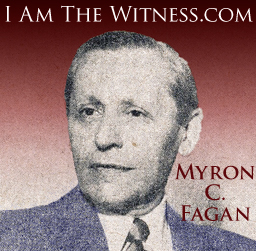 While I disagree with some of Mr. Fagan’s beliefs most of his information has held up  since he made these recordings 50  years ago.

“Myron Coureval Fagan (31 October 1887 – 12 May 1972) was an American writer, producer and director for film and theatre and a red scare figure in the late 1940s and 50s. Fagan was an ardent anti-communist and initiator of the Illuminati conspiracy. . . Wikipedia.

… Myron Fagan recorded his exposé on the Illuminati and Council on Foreign Relations in the late 1960’s on three LP Records. …

Now lets look at the subject of the Media Control by the Council on Foreign Relations from modern reporters . . .

The CFR is an organization sister to the Royal Institute of International Affairs (Britain), both founded in 1921 right after World War I when the League of Nations idea failed. The sole purpose of such organizations is to condition the public to accept a Global Governance which today is the United Nations. This is the true face of the so-called Globalists, and Centralized Power is what they are really after. . . . Read Complete post on youtube