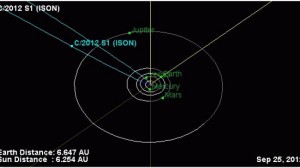 Dec. 28, 2012 (Reuters) — A comet blazing toward Earth could outshine the full moon when it passes by at the end of next year – if it survives its close encounter with the sun.

The recently discovered object, known as comet ISON, is due to fly within 1.2 million miles (1.9 million km) from the center of the sun on November 28, 2013 said astronomer Donald Yeomans, head of NASA’s Near Earth Object Program at the Jet Propulsion Laboratory in Pasadena, Calif. . . . Read Complete Report

Spotted Comet ISON Could Be Brighter Than Moon coming in 2013