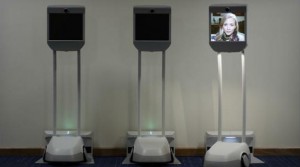 Engineer Dallas Goecker attends meetings, jokes with colleagues and roams the office building just like other employees at his company in Silicon Valley.

But Goecker isn’t in California. He’s more than 2,300 miles away, working at home in Seymour, Indiana.

It’s all made possible by the Beam — a mobile video-conferencing machine that he can drive around his company’s offices and workshops in Palo Alto. The five-foot-tall device, topped with a large video screen, gives him a physical presence that makes him and his colleagues feel like he’s actually there. . . . Read Complete Report

Why Commute? Just ‘Beam’ to Work

A growing number of companies are selling telepresence robots _ mobile video-conferencing systems that give remote employees a physical presence at work. At Suitable Technologies “beam” to work on the telepresence machine their company sells. (Dec. 24)

Beam, from Suitable Technologies, is a true remote presence device. Travel instantly to remote locations, with a depth of interaction that makes you (and everyone else) feel as if you’re really there.