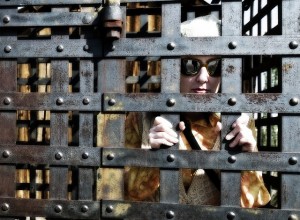 From  Las Angeles Review of Books

IN THEORY, PRIVATELY RUN PRISONS are simply another municipal resource that for-profit management companies like the Corrections Corporation of America (CCA) and GEO Group believe can be run cheaper and more efficiently than in the hands of government agencies: a free market alternative to the bureaucratic red tape of waste and regulation in the world of penitentiary administration. But running a penitentiary is not the same as running a municipal sewage authority. Having a monetary value tied to human incarceration and justice creates a deeply perverse incentive that should not exist in the world of commerce. When the for-profit prison industry places the iron fist of criminal justice in the invisible hands of the market and sells it as a cost-cutting measure, it is hard not to interpret as anything but the predatory capitalism of a self-perpetuating slave state. . . . Read Complete Report

Corporations are running many Americans prisons, but will they put profits before prisoners?

A grim new statistic: One in every hundred Americans is now locked behind bars. As the prison population grows faster than the government can build prisons, private companies see an opportunity for profit.