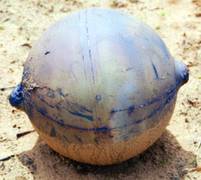 “AN as-yet-unidentified metallic ball was discovered in the Omusati Region last month, but officials at the National Forensic Science Institute are at a loss as to where it came from or what its purpose is”.  According to the report in an effort to stop the spread of speculation the official story is ” that it is made of a metal alloy which, although a “sophisticated material”, is known to man.”  I still put forth the argument that it could also have been manufactured by other than a man. Just because the “sophisticated metal” is known by man does not mean it came from the forge of a man. that is only speculation. . . . EDITOR
The discription of the object: “The sphere, which weighs just over 6 kg and has a circumference of 110 centimetres, landed near Onamatunga sometime between November 15 and November 20.” . . .  Read the complete report