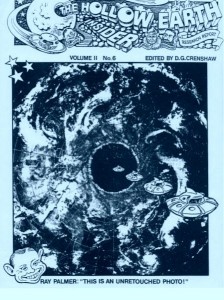 I can move the Hollow Earth debate to a more credible level. Go to your address bar and type in planetaryarchetypes.com. A special set of the Hollow Planets sculptures are on view at LELA Gallery, Feb 9, 2013 to Mar 3, 2013. LELA Gallery is located at 333 S. Alameda St. LA, Ca. 90013. Opening reception is Saturday,2-6pm.

Great Site that adds a lot to the subject. . . EDITOR

“The idea for an underlying design for each planet was originally spawned when I read a Verne-like piece of science fiction called Etidorpha.  First published in 1895, the strange book discusses 3 spheres of atmospheric force (refer to the above drawing).  The outer edge of the atmosphere is represented by the outermost dashed line.  The atmosphere then increases in density to a sphere located 10 miles below the Earth’s surface L.  The atmospheric pressure then begins to decline, falling off entirely by the second dashed line inward.  Three spheres also describe the governance of solid matter.  The outer surface of the Earth (outer dark circle), the inner surface of the Earth (inner dark circle), and the Sphere of Energy, the dashed line between.  At  the Sphere of Energy, mass becomes weightless.  An object dropped from point O will oscillate over the energy sphere.  Note that two spheres nearly coincide, the outer surface of the Earth and the sphere where the atmosphere reaches its maximum.  A second pair of spheres also coincide, the position where atmospheric pressure goes to zero and the location where mass becomes weightless”. . . . Read Complete Report w/ great graphics

EXTRA BONUS: Free E-book, the 1895 classic story of a trip into the inner realms ~  ETIDORPHA