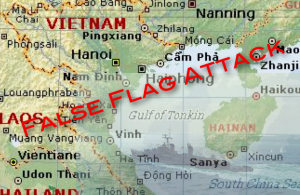 Posted in The American Legion Magazine

The Gulf of Tonkin incident in August 1964 proved to be America’s key entry point to war in Vietnam. The encounter sparked the first open fighting between the United States and North Vietnam, the first U.S. bombing of the North and an intensification of U.S. support for South Vietnam. It led to congressional passage of the Tonkin Gulf Resolution, which became the legal justification for America’s entry in the war. As with so much about Vietnam, events in the Gulf of Tonkin were not what they seemed at the time, and the consequences proved enormous. Even after five decades, we still struggle to understand what happened at the Gulf of Tonkin and why. . . . Read Complete Report

UPDATE: 4/10/2013; Be sure and read the comment posted by Jim Trenor who was in General Quarters in USS Turner Joy’s Combat Information Center during the incident and has a different view of events. He states that the attack did happen. Thanks for your eyewitness information Jim!

How To Start A War — (The Covert Strike-First Policy)

This secret audio was recorded of Lyndon B. Johnson’s request for a plan to trap Vietnam and force them into a conflict, and 3 weeks later the Gulf of Tonkin incident occurred.
What can we learn from history about how to start a war?
Well, first create an incident where it seams as though you have been attacked, then manipulate the law using the best lawyers and word-smiths you can find to get away with it. . . Read Complete Post