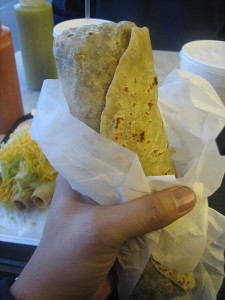 from The Smoking Gun

A Florida man is facing a misdemeanor charge after allegedly battering a teenage relative with a Taco Bell burrito.

Police allege that Erik Brown, 36, smashed the 16-year-old boy in the face with the burrito during a February 15 domestic dispute at a Port St. Lucie residence.

The victim told cops that he was having a “verbal altercation” with his mother and Brown, his brother-in-law, when Brown “asked his mother to bring him the burrito,”according to an arrest affidavit. . . . Read Complete Report

Check out the writeup for build details:
http://www.darwinaerospace.com/burrit…

Made possible by Yelp Engineering:
http://www.yelp.com/careers/