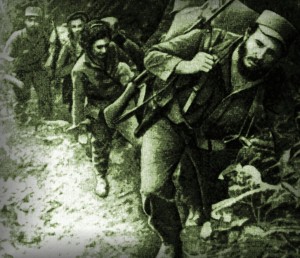 Cuban programmers have unveiled a new 3D video game that puts a distinctly revolutionary twist on gaming, letting players recreate decisive clashes from the 1959 uprising in which many of their grandparents fought.

Fight your way through swamps shoulder-to-shoulder with bearded guerrillas clad in the olive green of Fidel Castro and Ernesto “Che” Guevara. Your mission: topple 1950’s Cuban dictator Fulgencio Batista. Out to foil you are Batista soldiers and police who pop out from behind trees and fire from trucks and farmhouses. You pick them off with a vintage Colt .45 or Springfield rifle. If you’re hit three times, it’s revolution over. . . . Read Complete Report

The Cuban Revolution was a successful armed revolt by Fidel Castro’s 26th of July Movement, which overthrew the US-backed Cuban dictator Fulgencio Batista on 1 January 1959, after over five years of struggle. “Our revolution is endangering all American possessions in Latin America. We are telling these countries to make their own revolution.” — Che Guevara, October 1962 . . . complete description on youtube