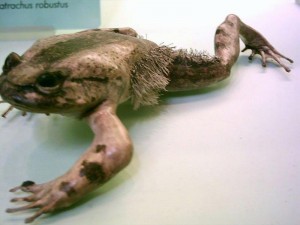 “Amphibian horror” isn’t a movie genre, but on this evidence perhaps it should be. Harvard biologists have described a bizarre, hairy frog with cat-like extendable claws.

Trichobatrachus robustus actively breaks its own bones to produce claws that puncture their way out of the frog’s toe pads, probably when it is threatened. . . . Read Complete Report