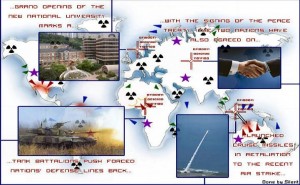 Ever wondered what it’s like to run a country? CYBER NATIONS,
A Game Review

The plethora of MMO games available today provides just about anything any gamer could want, but only a few are intended for truly long term play. Fewer still are free to play. The one and only MMO that I’ve played since December 2006 is Cyber Nations.

For those who like busty babes, virtual guns, stealing cars, air guitar, and real time action, just move along. There’s nothing for you here. For those of us who think more strategically than tactically, however, of all the MMO games out there this is the one that can satisfy. Yes, there is war and rumor of war at all times, but there are also diplomacy, trade, alliances, elections, secrets, spies, economy, foreign aid, environment, tax rates, infrastructure, technology, land holdings, natural resources, religion, random events (chance, good or bad), and population happiness. Yes, the virtual citizens of your nation may end up rioting in the streets and burning you in effigy if you screw up their virtual take home pay.

There are also camaraderie and rivalry among national leaders (real people, i.e., other players) and among alliances of nations. It’s a community. It is by achieving the right balance of all those things within the community that determines whether a Cyber Nation is successful. It reminds me of a combination of Axis and Allies, Risk, and Diplomacy all rolled into one and an added dash of Trivial Pursuit.

In Cyber Nations, there are only two choices that, once saved, can’t be changed: The “ruler name” and the “nation name”. Every other aspect of how you manage your nation is adjustable, some with a waiting period, so you can change your strategy at almost any time.

Economics is one of the tougher strategies to master in the game, but there are tools, calculators, references, and experienced folks who can help you out with that. Conducting warfare can also be a little tricky to gain mastery, but as long as your nation can survive, you still have a chance. The only two ways to completely fail is to get into “bill lock” or to abandon your nation.

Bill lock comes about when you don’t have enough tax revenue coming in to pay all your government’s bills. That situation is usually the result of having your nation gutter stomped in a war or four. Abandonment of 25 days (inactivity limit) will get your nation removed from the game database. You may even be able to get out of bill lock if you have rich friends, but once a nation is deleted, it’s gone.

Actual game play is a turn per day when you pay your bills, collect taxes, maybe buy some land, infrastructure, improvements, technology, navy, tanks, air force, missiles, nukes, spies…well, all the fluff and stuff that lets you carry out your grand plan for world domination! This can usually be about a minute a day in peace time, but during those times your nation is at war, the time to complete a day’s turn can increase quite a bit.

I’ve seen the nation count very nearly 50,000. That’s 50,000 people playing at once. I’ve also seen it drop to fewer than 11,000. Really, in this one, the more the merrier. I’ve been in the top 5% and I’ve been hammered to the middle of the pack and come back. For six and a half years, I’ve kept the same nation going. While that is hardly an achievement worthy of acclaim in the real world, nor even a record within the game itself, it is something that more than 120,000 other players have failed to do.

Click on one of the Cyber Nations banners to join or to learn more.