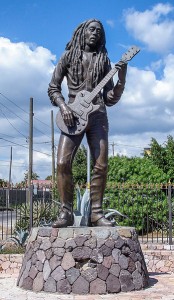 Marley was actually warned later by the CIA,that if he did return to Jamaica before Government elections were held, he would be assassinated.The assination attempt was believed to be politically motivated at the time, though weather it was from left of right wing was a matter of debate. Evidence since, including testimony of a former CIA agent, has suggested the CIA supplied weapons for this attack and may have been involved in motivating it. The CIA have, to date, refused to de-classify any of their files and information regarding Bob Marley or offered explanation as to why they have classified files on him.