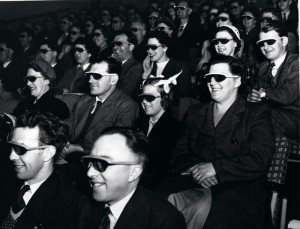 Featured Image: Audience wearing special glasses watch a 3D “stereoscopic film” at the Telekinema on the South Bank in London during the Festival of Britain, 11 May 1951. CREDIT: The National Archives UK. Source: Wikipedia Commons.  This file is licensed under the Open Government Licence v1.0

A new wireless immersive virtual reality device allows users to enjoy a 3D world with just a pair of goggles and their own smartphone or tablet. RT’s Anastasia Churkina met up with the inventor to test out the 360 Goggles, and how they can change the gaming world as we know it.
Find RT America in your area: http://rt.com/where-to-watch/
Or watch us online: http://rt.com/on-air/rt-america-air/