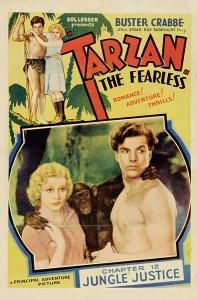 Featured Image:  Film poster for episode 12 of the1933  American film serial Tarzan the Fearless.  CREDIT: Employee(s) of Principal Distributing Corporation. SOURCE: Wikipedia Commons. (This work is in the public domain in that it was published in the United States between 1923 and 1977 and without a copyright notice.  Public Domain).

A FATHER and son have been found in a Vietnamese jungle after disappearing 40 years ago during the war with America.
Local officials made contact with Ho Van Thanh, 81, and Ho Van Lang, 41, after villagers reported seeing the pair dressed in loin cloths.