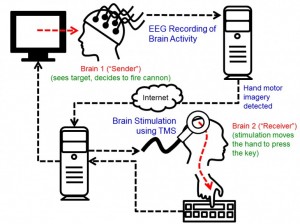 Featured Image: A diagram of the process used in the experiment. CREDIT: Rajesh Rao/ University of Washington. SOURCE: GizMag.com

Brain-to-brain interfacing – it’s previously been accomplished between two rats, but now it’s been achieved between two humans. Rajesh Rao, who studies computational neuroscience at the University of Washington, has successfully used his mind to control the hand of his colleague, Andrea Stucco. The two were linked via a Skype connection.

The experiment, which was conducted on Aug. 12th but announced just yesterday, worked as follows … Read Complete Report