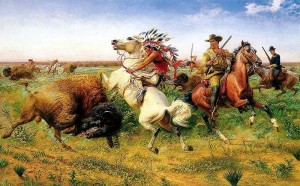 “The Grand Duke [Alexey Romanov] in the company of General Philip Sheridan, General Edward Ord, and Lt. Colonel (Brevet Major General) George Armstrong Custer, the latter having been selected to be Grand Marshall of the hunt, arrived at Fort McPherson on 13 January 1872, by a special train provided by the Pennsylvania Railroad Company. They were greeted by an enthusiastic crowd, headed by William Frederick Cody (known as Buffalo Bill). After speeches, the Duke’s party set out for the hunting grounds.”[47] . . . SOURCE Wikipedia.

A painting has been discovered of the last crown prince of the Russian Empire, Alexey Romanov.