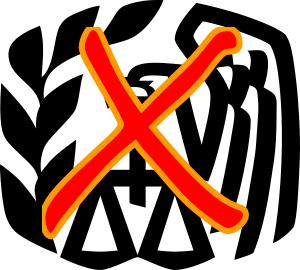 Featured Image: Background; Logo of the Internal Revenue Service. SOURCE: Wikipedia Commons.  (This image is a work of the United States Department of the Treasury, taken or made as part of an employee’s official duties. As a work of the U.S. federal government, the image is in the public domain).  [“X” Text added by THEI staff’]

“Making the IRS more customer-friendly, making its tax collection more efficient and reducing the red tape generated by its daily operation are like giving aspirin to a dying cancer patient. It may ease the pain ever so slightly for a little while, but the terminal disease keeps eating away at the patient’s body. As former Republican presidential candidate Steve Forbes has said, “We can’t tinker with this tax-code monstrosity or try to reform it around the edges. The only thing we can do with this hideous beast is kill it, drive a stake through its heart, bury it and hope that it never rises again to terrorize the American people.” Read Complete Report