The belief in a Lizard or Reptilian race living in the caves and underground tunnels of the subterranean Earth are not an x-file exclusive. Here is a story from the L. A. Times dated 1/29/34. From our friend John Rhodes reptoids.com site:

Busy Los Angeles, although little realizing it in the hustle and bustle of modern existence, stands above a lost city of catacombs filled with incalculable treasure and imperishable records of a race of humans further advanced intellectually than the highest type of present day peoples, in the belief of G. Warren Shufelt, geophysicist mining engineer now engaged in an attempt to wrest from the lost city deep in the earth below Fort Moore Hill the secrets of the Lizard People of legendary fame in the medicine lodges of the American Indian.

So firmly does Shufelt and a little staff of assistants believe that a maze of catacombs and priceless golden tablets are to be found beneath downtown Los Angeles that the engineer and his aids have already driven a shaft 250 feet into the ground, the mouth of the shaft being on the old Banning property on North Hill street, overlooking Sunset Boulevard, Spring street and North Broadway.

And so convinced is the engineer of the infallibility of a radio x-ray perfected by him for detecting the presence of minerals and tunnels below the surface of the ground, an apparatus with which he says he has traced a pattern of catacombs and vaults forming the lost city, that he plans to continue sending his shaft downward until he has reached a depth of 1000 feet before discontinuing operations. . . . Read Complete Report

A 1934 Map Of The Secret Lizard City Under Los Angeles 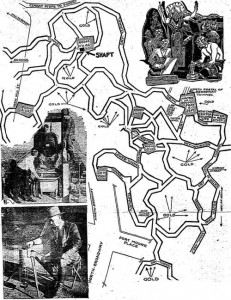 In 1934, G. Warren Shufelt told the Los Angeles Times he had discovered the remnants of an ancient reptilian civilization under L.A. . . . Read Complete Report