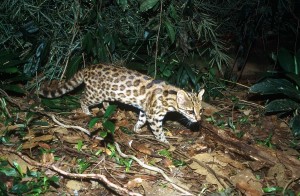 From National Geographic Posted by Carrie Arnold in Weird & Wild on November 27, 2013

Wild cats are charismatic creatures, so you’d think we’d know them all pretty well by now. Just how little we understand—at least in some cases—is reflected in the identification of a new species of cat known as a tigrina in northeastern Brazil.

Scientists have discovered that two populations of tigrina previously thought to be one species do not, in fact, interbreed and thus are distinct, according to results published today in Current Biology. . . . Read Complete Report