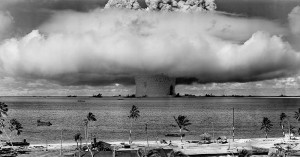 To Jamie Edwards, a 13 year old student from Penwortham, England, setting the record of being the youngest person to build a nuclear fusion reactor was more important than video games or girls. That last part will probably change within a couple years, but his enthusiasm for science is very real and, for now, he’s a record holder.

Of course, that also means he’s on the radar: Will he be a NASA scientist delving into the workings of the solar system or will he be kept under constant CIA surveillance lest his brain power fall under the control of some nefarious terrorist organization, like, say Disney World?