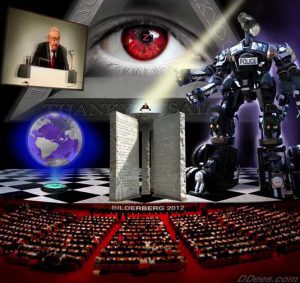 Jim Tucker, who has been tracking Bilderberg since 1975, talks about his adventures to a group of protesters at Bilderberg 2012. Mark Dice is a media analyst, political activist, and author who, in an entertaining and educational way, gets people to question our celebrity obsessed culture, and the role the mainstream media and elite secret societies play in shaping our lives.

Secret Rulers of the World – The Bilderberg Group – Jon Ronson

For decades Jim Tucker worked virtually alone to reveal the hidden organization that scripted the European Union and the Euro even before 1955. He was ignored, then ridiculed, then fought, but he eventually won. Although Bilderberg is still something of an open secret in the mainstream media, no one denies its existence and many large media outlets now cover it. Many people have awakened to this organization’s work to destroy the sovereignty or countries and impoverish and enslave their people. . . Read Complete

Dig a Little DEEPER: Jim Tucker and the Bilderburg Group

Next Sunday May 21, 2017:  THEI Eyeballs the Resistors Part 6: Jim Marrs: The worlds expert on the JFK Assassination and Much, Much More