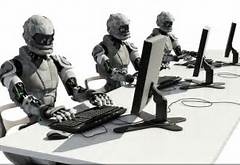 Whether automation produces net job losses depends on the relative sizes of its job-creation and job-destruction effects.

Researchers with the Centre for European Economic Research, relying on job-level rather than occupation level data, estimate the number of jobs at risk to automation could be as low as nine percent.

Researchers at Oxford University surveying 702 occupations reported in 2013 that nearly half of all jobs in the United States are at risk of being automated away during the next two decades.

Another study in March 2017 by analysts at the consultancy PwC estimated that that around 38 percent of jobs in the U.S. are at potential high risk of automation. . . . Read Complete Report