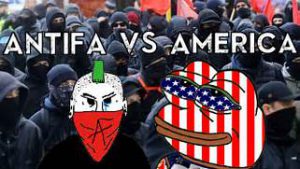 Ted Nugent joins Alex Jones live via Skype to discuss the prospect of civil war springing to life across America and makes the bold observation that the left will be the ones to initiate such conflicts.

UNDERCOVER IN ANTIFA: Their Tactics and Media Support Exposed!

What happens when two guys infiltrate Antifa, live amongst them for weeks, and take part in their deeply rooted tactics of disruption and violence? Want to watch the full show every day? Join #MugClub! http://louderwithcrowder.com/mugclub</

You Won’t Believe WHO Was JUST Found On Antifa’s LEAKED Tax Return—BOMBSHELL!