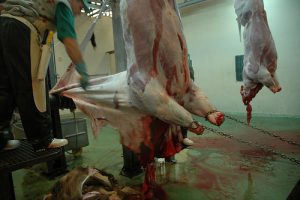 Rumors have been around for 50 years that various animals are skinned alive for the fur and leather.  The latest claim that cows are skinned alive is being spread on Facebook and other places on the internet.  I have looked into this claim and from my research this is strictly a case of Urban Legend.  The following explains it best. . . . Your Editor Dennis Crenshaw

by Truth About Fur, voice of the North American fur trade

One of the most insulting and insidious lies spread by animal activists is that animals are “skinned alive” for their fur.

The origins of this vicious lie go back fully 50 years, to the first seal-hunt protests, and those charges were soon proved to be false, as we will explain soon. Ten years ago, the old myth was revived – this time about Asiatic raccoons. Since then, activists have become more and more extravagant, claiming (and, no doubt, believing) that rabbits, mink and other species are also treated cruelly, including being skinned alive.

One of the main goals of Truth About Fur is to debunk falsehoods about the fur industry, so let’s make something perfectly clear: Animals are NOT skinned alive for their fur. Period.

Here are some of the reasons why it is absolutely ridiculous to even suggest it. . . . Read Complete Report

Is’s defiantly a dirty and horrible business – they do skin animals – but at least they kill them first not “skin them live”.  While the lie that animals are “skinned alive” for their skins is included in the video below, the truth is bad enough without including that lie.  The rest of the content ot the presented video is true according to everything I have looked at on the subject and for that reason I posted it.

The video is presented by PEDA, an organization I dislike for various reasons. Mainly their resorting to lies.

However the video should be watched so you know about the cruelty that goes into producing your leather products.  After all, we all wear shoes.. . . Your Editor Dennis Crenshaw

PETA (People for the Ethical Treatment of Animals)

Published on Sep 24, 2014
Could you step into the life of a cow in the leather trade for just one minute? Most leather comes from developing countries, such as India and China, where animal welfare laws are either non-existent or not enforced. In India, a PETA investigation found that workers break cows’ tails and rub chili peppers and tobacco into their eyes in order to force them to get up and walk after they collapse from exhaustion on the way to the slaughterhouse.
Category: It's a Strange World After All / Tags: Cows, leather, skinned