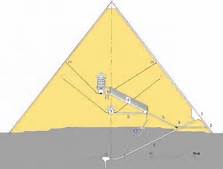 It may be a clue to how the giant structure was built.

On the Giza Plateau in Egypt rise three large pyramids—the tallest and oldest of which is the Pyramid of Khufu. It is also known as simply the Great Pyramid of Giza. You know what it looks like. It’s one of the seven great wonders of the world.

Yet, for all its fame and antiquity, so many questions remain. How was it built? Why is there nothing in the pyramid, except a broken sarcophagus missing its lid? Could there be anything else hidden inside this massive structure? In the absence of information, there is of course ferocious speculation. And now, an intriguing new piece of information: the discovery, announced today, of a large, previously unknown “void” in the Great Pyramid. . . . Read Complete Report