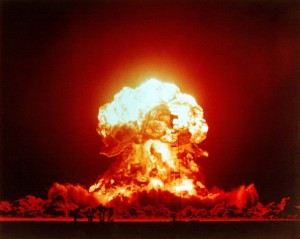 As many of you already know I an a big advocate of moving underground [watch for up-coming series, Living UNDER this Mess starting next month].  But let’s face it that will only work during the short-term. When it’s time for the big Enchilada, the final segment, the last twist of our spaceship earth I think we’ll need to follow the advice given below and … get the flock off! . . . EDITOR
from Big Think
Big Think Editors on August 6, 2010, 12:00 AM

Let’s face it: The planet is heating up, Earth’s population is expanding at an exponential rate, and the the natural resources vital to our survival are running out faster than we can replace them with sustainable alternatives. Even if the human race manages not to push itself to the brink of nuclear extinction, it is still a foregone conclusion that our aging sun will expand and swallow the Earth in roughly 7.6 billion years.

So, according to famed theoretical physicist Stephen Hawking, it’s time to free ourselves from Mother Earth. “I believe that the long-term future of the human race must be in space,” Hawking tells Big Think. “It will be difficult enough to avoid disaster on planet Earth in the next hundred years, let alone the next thousand, or million. The human race shouldn’t have all its eggs in one basket, or on one planet. Let’s hope we can avoid dropping the basket until we have spread the load.” .

Hawking says he is an optimist, but his outlook for the future of man’s existence is fairly bleak.  . . . Read Complete Report