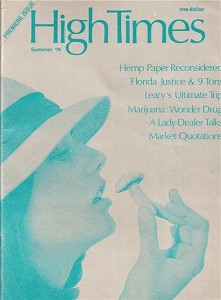 NEW YORK—Casual readers of the marijuana-enthusiast magazine High Times are no more likely than non-readers to develop a habit for harder forms of reading, according to a study released Monday by the National Institutes of Health.

The findings raise significant doubts about the so-called “gateway magazine” theory, which claims that High Times readers run a higher risk of moving on to harder-hitting titles such as Time and Newsweek, or even mind-expanding publications like Scientific American.