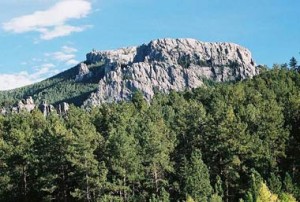 Far below the Black Hills of South Dakota, crews are building the world’s deepest underground science lab at a depth equivalent to more than six Empire State buildings — a place uniquely suited to scientists’ quest for mysterious particles known as dark matter.

Scientists, politicians and other officials gathered Monday for a groundbreaking of sorts at a lab 4,850 foot below the surface of an old gold mine that was once the site of Nobel Prize-winning physics research.