Big Bang theory a bust: Scientist claims there’s something out there 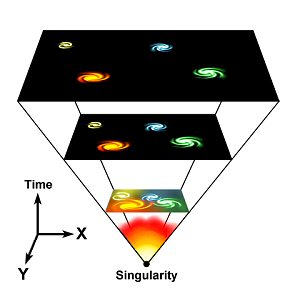 Diagram: Illustrates the “big bang” theory. This work has been released into the public domain by its author, Gnixon at the wikipedia project

According to the theory the universe started as a tight, hot, pressurized ball of energy that suddenly bust forth to expand into, and continues to expand into, the Universe we thank we know today. . . EDITOR

WHAT if there was an entire universe that existed before the Big Bang? This is the theory of a leading Oxford University scientist who claims to have evidence of stars and galaxies that existed long before the universe as we know it formed, The Daily Mail reported. . . . Read Complete Report

Category: Advanced Science and Such / Tags: a bust, big bang theory, something out there, universis that exested befor the big bang