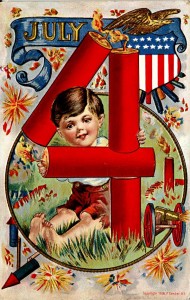 My personal favorite holiday of all.  Not only celebrating the date of the birth of our great nation, but the time spent hanging with family and friends, eating burgers and hot dogs followed by cold Watermelon and good times.  And the best time of all… after dark.  The fireworks, the bombs bursting in air… ah, the 4th of July, hot time in the summer!

Of course it must have been a more somber time at the original 4tth of July celebration. After all once the protocol and signings were completed a major historical move had been made. The creation of a new nation, the united States of America. 1776 was the year.

What most people today don’t realize is that it was only a small percentage of people living in the British Colonies’ at the time who wanted to withdraw from the protection of the Empire.  The makeup of the people living here at that time were a few elitist men who had been sent to the colonies to advance their family fortunes or to hide out over some scandal perpetrated back in the mother country . The rest were a mixture of criminals sent from England to serve their time outside of the British Islands along with many poor who had gone into debt to escape the poverty of 18 century England. ( They were actually slaves with little chance of buying their way out of bondage, but because of the horror of how African Slaves were treated in the next 3 century’s if became politically incorrect to talk about the thousands of  white poor people brought over as “slaves.”  They became known as ‘indentured servants’. In reality many whites also lived and died as slaves in a country they were forced to move to, and a master they didn’t choose.. There was no middle class. You were either one of the elitists or a peasant.

Some of the English elitists that had immigrated to America felt they could make a lot more money if they could get away from the British Tax Collectors and have the right to print their own money other. They didn’t like the idea of paying the privately owned Bank of England to print paper money with a handler’s fee attached.

Using their ownership and access to the printing presses of the day they begin to put out newspapers and broadsheets awaking the less fortunate of the ideas of a “new” way to run a government.  They were only partially successful. But they were successful enough to pull it off. And on July 4th, 1776 a new nation was born. The united States of America. 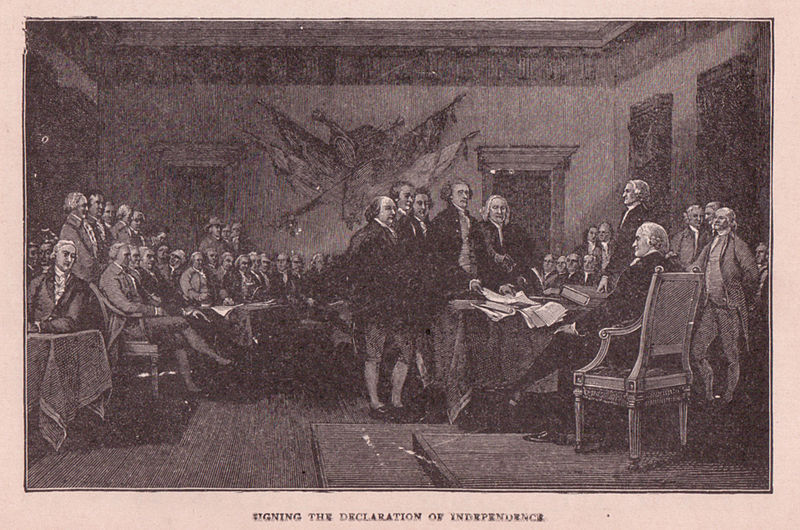 But there are always two sides to every issue.  There were also colonists in the elitist crowd who did not want the “new order” to succeed and felt it was best for England to remain in possession of the American Colonies.

Education is the Answer

In the same year that the young united States begin to feel its way into becoming the first “for the people” government in the history of the world a secret society was formed in Germany by Adam Weishaupt, the Illuminati, which was financed by the House of Rothschild.

From “How the Order Controls Education (1986) by Anthony C. Sutton

“The Illuminati was founded May 1, 1776 by Professor Adam Weishaupt of the University of Ingolstadt. It was a secret society, but in 1785 and 1787 several batches of internal documents came to the Bavarian Government. Subsequent investigation determined that the aim of the Illuminati was world domination, using any methods to advance the objective.”..

According to my well read friend Rick Osmon the FIRST Bavarian Illuminati was actually formed to try and wake the people up to the fact that there was no need for Monarchs or religious groups to lead any nation. They wanted science to rule. It was the more secretive Illuminati that was formed after the first group was wiped out and disbanded that the secret society begin working on world domination.

I differ in that I believe that the original Illuminati was never broken up, just forced into deep hiding. And I DO believe that their end goal from the start was world domination… after they got rid of the Monarchs and religious influence in the governments of the time I believe their plan was to network and join with other Secret Societies and elitist groups, put their own puppets into the lower easier spots to get to of the political sector and slowly take control using whatever means possible to reach their goal of world domination . . . EDITOR

“The significance for this study is that the methods and objectives parallel those of The Order. [AKA Skull and Bones Secret Society located at Yale. Ed.] In fact, infiltration of the Illuminati into New England is known… So far as education is concerned, the Illuminati objective was as follows:

“We must win the common people in every corner. This will be obtained chiefly by means of the schools, and by open, hearty behavior, show, condescension, popularity and toleration of their prejudices which we shall at leisure root out and dispel.” (1)

The elitist families who were against the “new order” of the fledgling united States realized the new way of thinking of “freedom and prosperity for all in a free nation” being taught to a basically e-literate population would take a long time to change.  They also understood that it could be done, but they would have to control education for it to happen. By controlling the Universities in the United States they could use propaganda and mind control to install in the minds of the young people who went to their controlled school’s of higher learning the advantages of working towards the Illuminati end  game . . . world domination. Once these men were indoctrinated they could be sent out into the United States and to start and run the major universities and clandestinely teach the road to the world domination they wanted.

And the American elitists who were against leaving the fold  of the Royal’s felt that they could, when the time came, return that world domination back to who they felt were the rightful controllers of the world, the British Crown. 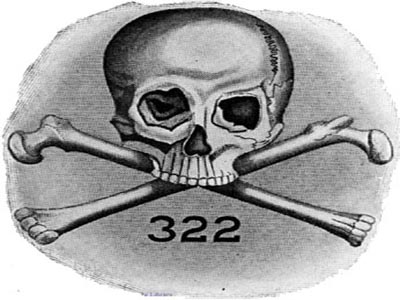 It All Began at Yale

“In the 1850s, three members of The Order left Yale and working together…made a revolution that changed the face, direction and purpose of American education. It was a rapid, quiet revolution, and eminently successful. This notable trio were all initiated into The Order within a few years of each other. All three went to study philosophy at the University of Berlin, where post-Hegelian philosophy had a monopoly.” (2)

The Three Men were:

Student at Universities of Berlin and Bonn, 1856-58

Student at University of Berlin, 1854-55 under Karl von Ritter and Friedrich Trendelenberg, both prominent “right” Hegelians

The next move in the plan was to gain control of our money which they did in 1913 by forming their Federal Reserve (private) Bank.

The Beginning of the End

We rose on the 4th of July 1776 as potentially the greatest nation on earth.  Unfortunately the forces against newly formed nation and the attacks on our rights and  personal freedoms would be led by The House of Rothschild financed secret society, the  Illuminati . . . a far reaching organization with the stated goal of World Domination. The plan and means to destroy our country was already in place. The Controllers just needed a lot of time. Something they had plenty of.

The lead-in Question is too easily answered I’m Afraid

So, the question I started with was “How far have we come since 1776?

We only have to look back a few days to answer that. The founders of our Country were trying to give us a nation with a small central government to govern our dealings with foreign countries by collecting the trade taxes etc.; to conduct the united States’ business with foreign  states; in addition congress was to issue our money based on how much gold and silver we had in the treasury. That was about it. The federal government was meant to govern not regulate.  Most of the regulating was the individual States Rights. Remember those?

It was not the intention of the founding fathers for the federal government to take control of our lives by regulating everything they could get their hands on.  That power was suppose to be handled by the separate united State Governments who they felt knew the needs of their regions citizen’s better than a bunch of strangers in far off Washington D.C..

But, like I said we only have to look back a couple of days to see just how far from the plans of our founding fathers our present government has taken us.

As everyone knows the Supreme Court has found it constitutional for the federal government to force us to buy a private company’s services under threat of penalty.  Call it a tax, a fine, or a mandate. Under any name its forcing ever American to deal with a private Insurance company or face more taxes.

What next? A certain brand of raincoat or we’ll be taxed for walking in the rain because we might get sick and have to use the government controlled medical system

GO DEEPER: 2 Free E-Books – Must read on the subject:

How the Order Controls Education? (1986) by Anthony C. Sutton

Final Warning: A history of the new World Order (1995) by David Rivera

Uploaded by ConspiracyScope on Jul 1, 2011