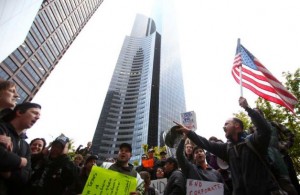 Chris Beiter, right, leads protesters in singing the Star Spangled Banner as Occupy Seattle protesters take to the streets of downtown Seattle during the second week of the local protest. Some in the crowd became emotional during the singing. Photo: JOSHUA TRUJILLO / SEATTLEPI.COM

It seems that the establishment law inforcment does not have enough crime to keep them busy in Seattle. That or the Occupy movement is realy starting to get under their skin. Shame on you Seattle Police department . . . EDITOR

On Tuesday morning, organizers involved with the Occupy Seattle movement woke up to the sounds of flash-bang grenades.The local SWAT team raided the apartment with guns drawn looking forevidence of anarchist material and allegedly were continuing an ongoing investigation of aMay Day riot. Phillip Neel, a political organizer, joins us with more on what happened that morning.