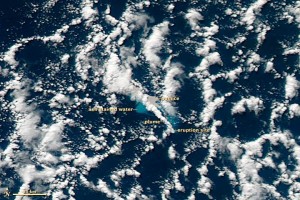 I have been reading and studying earthly mysteries almost all of my life and I have never heard of any instance of another case of rocks floating on the sea, although I can see where it could  happen. I’d like to study any other such happenings. It anyone knows of such a thing being reported before please send the details to me. Thanks. . . . EDITOR

WELLINGTON, New Zealand (AP) — A mass of small volcanic rocks nearly the size of Belgium has been discovered floating off the coast of New Zealand.

The stretch of golf-ball-size pumice rocks was first spotted this week by a New Zealand air force plane about 1,000 kilometers (620 miles) northeast of Auckland. The rocks stretch for about 26,000 square kilometers (10,000 square miles). . . . Read Complete Report

Jeanna Bryner, LiveScience Managing Editor
Date: 14 August 2012 Time: 12:22 PM ET
The source of an enormous floating mass of pumice spotted this week in the South Pacific Ocean off the coast of New Zealand has been discovered: NASA satellite images and other sleuthing science have pinpointed an erupting undersea volcano called the Havre Seamount as the culprit. . . . Read Complete Report
Category: It's a Strange World After All / Tags: floaing, New Zealand, rocks, volcanic