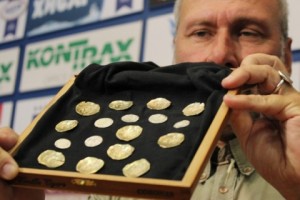 Bulgarian archaeologists expect to find at the holy rock city of Perperikon the largest ever medieval coin treasure in the country.

The announcement was made by leading Bulgarian archaeologist, Prof. Nikolay Ovcharov, after his team recently found a total 11 gold and 6 silver coins.

The coins have been found dispersed in what has been used as a toilet hole with a 2-meter diameter, leading the experts to believe that they were hidden and buried during the Ottoman invasion of the area. Such treasures were usually placed in clay pots or similar vessels and then concealed, while for the latest find it is believed that the coins were put in some sort of a purse, which has decomposed over the years. . . . Read Complete Report