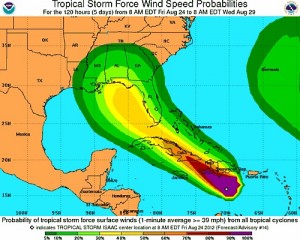 The convention starts on Monday and organizations are preparing plans in case Isaac delivers powerful rain and winds to the Tampa area.

According to the Associated Press (AP), a small group of protestors have said the storm might derail their demonstration which includes large signs and papier-mâché political puppets. . . . Read Complete Report

Protesters getting ready for GOP convention in Tampa

Published on Aug 18, 2012 by djgabrielpresents

A coalition of protesters laid out their plans for the upcoming Republican National Convention. They have demands, and they’re hoping the world will listen.
The Coalition to March on the RNC says their message is simple.
“We’re here to demand good jobs, healthcare, affordable education, equality and peace,” said Jared Hamil, a spokesman for the Coalition to March on the RNC.
They held a press conference Wednesday morning at Perry Harvey Sr. Park in downtown Tampa. It will be the site of one of the largest rallys planned for the RNC.
“You’ll see a long line of 5,000 protestors, something Tampa I don’t think has ever seen before,” Hamil said. The group will meet in the park on Monday, August 27th. They plan to hear from 30 speakers and then by noon, hit the streets. . . . Text posted with the video on youtube