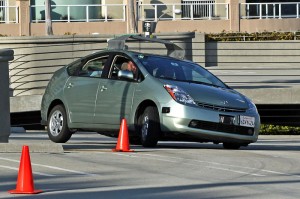 California’s legislators have approved Google’s robot cars on public roads Wednesday and now the governor can decides the bill’s fate.

If the bill is signed by Gov. Jerry Brown, it would greatly change how cars would be made and driven — namely by computers, according to the San Jose Mercury News. About 99 percent of all traffic and fatal collisions are caused by human error, so robots might be a safer bet. Read Complete Report