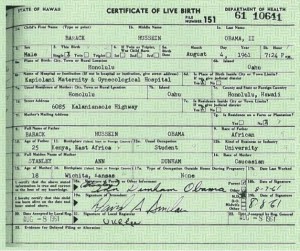 Photo: Birth Certificate published on-line by the White House purported to be Barack Obama’s. Study by several document experts say it is a forgery.  Obama has continued to ignore judge’s orders to appear in court to clear this up.

Once again we present action concerning Obama’s eligibility to hold the office of President while the Controllers MSM continues to look the other way and ignore the most important question of the coming presidential election. Is  Barack Hussein Obama  constitutionally and legally qualified Democratic candidate for president of the United States.” I predict that sooner or later this story will smack the MSM in the face like the food in the popular commercials. . . Probably be the taco . . . EDITOR

The letter from Larry Klayman explains that’s because those officials simply cannot know Obama’s eligibility for sure, and the law doesn’t allow them to make assumptions.

In his letter to Robert Bauer, general counsel to the Democratic National Committee, Klayman explained that the evidence shows no one knows for sure about Obama’s eligibility, so letters from the DNC to states about Obama’s 2012 candidacy may be problematic. . . . Read Complete Report