In Quest of the Cosmic Origins of Silver: Silver and Gold Materialized in Different Stellar Explosions (W/Video) 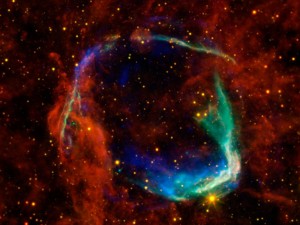 Photo: All Eyes on Oldest Recorded Supernova. This image combines data from four different space telescopes to create a multi-wavelength view of all that remains of the oldest documented example of a supernova, called RCW 86. . . . Read Complete Discription SOURCE NASA

ScienceDaily (Sep. 6, 2012) — In the quest for the cosmic origins of heavy elements, Heidelberg scientist Dr. Camilla Hansen has established that silver can only have materialised during the explosion of clearly defined types of star. These are different from the kind of stars producing gold when they explode. The evidence for this comes from the measurement of various high-mass stars with the help of which the stepwise evolution of the components of all matter can be reconstructed. . . . Read Complete Report

The death of a star

3-d video from NASA’s Chandra X-Ray Observatory. It shows the explosion of SN 2006gy. the extremely massive star shed some of its outer layers in a large eruption prior to its violent collapse. The explosion then plows into the expelled cooler gas, creating a brilliant light show. Astronomers think Eta Carinae in the Milky Way could explode in the same way at any time. . . . Text posted with video at youtube