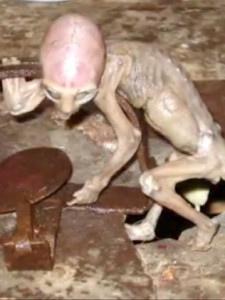 Photo: The corpse  of an “alien” caught and drown in Mexico 2007 SOURCE The Daily Telegraph

Look folks, I don’t make this stuff up I just pass it along. . . .EDITOR

from The Daily Telegraph

IS this bizarre creature really an alien baby or just part of an elaborate hoax – and was it the cause of a mysterious revenge death?

Mexican TV revealed the almost unbelievable story – in 2007, a baby ‘alien’ was found alive by a farmer in Mexico.

He drowned it in a ditch out of fear, and now two years later scientists have finally been able to announce the results of their tests on this sinister-looking carcass. . . Read Complete Report

I would believe the first place to look for as the origin of this creature is not “some other planet” but the subterranean world. . . EDITOR

This is what many have not seen or know of the tests done on this creature caught in Mexico, whether its an unknown creature or an aliens pet left behind.. the fact is it is not a monkey & is unknown, but should be studied more… maybe try to clone it? lol Text posted with video on youtube

Metepec’s Creature Video. Is an Alien?

This video is Chapter IX International research and world news. Investigation Metepec’s CREATURE on July 9th, 2010.
It is claimed that DNA analysis proves that this creature is not human. What do you thing? Is this just another waste of time, or is there something important going on here?

Category: It's a Strange World After All, UFO Enclosure /