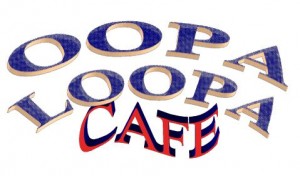 The Oopa Loopa Cafe, an internet weekly entertainment venue since early 2008, is now expanding in scope, schedule, and reach. A two hour daily schedule, a real multi-camera, TV studio with experienced and adept production personnel, and a substantial cable and internet audience are just the parts that make it technically possible. The most important aspect is the content. Adding to a rich history of informative and entertaining guests and topics, the Oopa Loopa Cafe will now also feature regular contributions from Ancient American magazine, Temerity Magazine, UFO Journal, InvestComicsTV, JOLE Productions, Unraveling the Secrets, independent films, local interest sites and events with broad tourist appeal.

Those already aware of the Oopa Loopa Cafe know how much variety of topics and opinions always spurred the content of the show. Well, that’s about to expand in a big way.

Look for a dedicated “watch live box” in the right column and instructions for additional viewing – and participation – options really soon.

One participation option that is truly an odd one: Participate as a remote guest or co-host. The Oopa Loopa Cafe is going to actively recruit a full time co-host and continuing guests from the area around the studio (Daviess, Martin, Pike, Knox, Gibson, Dubois and Green counties in Indiana and Lawrence county Illinois) so that we have someone actually on set. But we’re also going to recruit a small number of people to appear as “remote”, live via internet. These may be authors, researchers, artists, musicians, actors, scientists, sideshow acts, or weird uncles. Hey, it might even be Dennis once in a while.

The show will be live from noon til 2 PM eastern and will also be available for on demand viewing (1 day delay).