Anonymous Training Video – Become A Member In Less Than 1 Hour

Anonymous – WHAT WE ARE CAPABLE OF

A coordinated day of protests around the world last November 5 was planned by members of the amorphous hacktivist group Anonymous. New documents indicate that Anons weren’t the only one interested in those events, however.  . . . From Description posted with video.

In a mass demonstration of people power, crowds in 450 cities around the world filled the streets wearing Guy Fawkes masks.  “The corrupt fear us. The honest support us. The heroic join us” – under this motto protesters united in a global mass-march to deliver various messages.

From Sydney to Los Angeles, from Johannesburg to London – thousands came forward to make their voices heard. Among key ideas which virtually connected all different protests were anti-capitalist idealism and the rejection of NSA surveillance. Some rallies had a sense of carnival, where whole families with kids marched in protest, while other gatherings – like in London and Washington – turned more intense, with people not hiding their rage.  . . . Read Complete detailed Report with great photos.

People in hundreds of cities across the world are taking part in mass rallies planned by the global protest group – Anonymous. The day of action is called the Million Mask March – it’s uniting those, protesting against the violation of online privacy, as well as corporate greed and corrupt governments. Protesters wearing Guy Fawkes masks – are demonstrating their allegiance with the Anonymous hacktivist group – infamous for its online anti-government actions. One of the biggest rallies is underway in Washington DC – RT’s Gayane Chichakyan joined the protesters there. Live Updates: http://on.rt.com/fnd6uh

Category: Fighting Back / Tags: ‘The Corrupt, anonymous, as it happened, Fear Us, Massive, Million Mask March 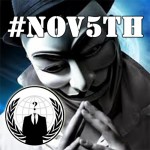 This November 5th, the “World Wide Hackers Group” Anonymous says that it will target government facilities… all over the globe.

Anonymous #OpNSA – Paperstorm scheduled for the 2nd, 20th and 30th of September. Spread the truth!

“Members of the Anonymous hacker collective, known as Anons, are targeting US lawmakers who have financial ties to intelligence contractors in their latest campaign. Unlike other Anonymous operations, however, OpNSA does not involve hacking or illegality of any kind. Instead, the operation aims to bring attention to what Anons have termed collusion between US senators and private contractors, whom Anons allege enabled privacy violations as part of National Security Agency surveillance programs. The contractors include Northrop Grumman, Booz Allen Hamilton, Raytheon, Lockheed Martin, General Dynamics and others…”.* The Young Turks host Cenk Uygur breaks it down.

Greetings world, we are Anonymous,
This is an official statement regarding Operation NSA.

To join us on a public IRC channel, go to: webchat.anonops.com channel: #opnsa

Get up to par on all of Anonymous’ Operation “#OpNSA” reports at their youtube page:

FBI Agent: We’ve Dismantled The Leaders Of Anonymous (With Videos)

The hacker collective Anonymous has not produced as many high-profile cyber attacks as it once did, a drop-off that can be directly attributed to the arrests of the group’s core members, an FBI official told The Huffington Post this week.

Anonymous – “Dismantled By The FBI”