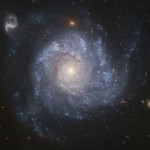 Photo: A galactic image taken by the Hubble Space Telescope. Galaxies like this one “screen” the effect of a hypothetical fifth force.

(Phys.org) — Most people take gravity for granted. But for University of Pennsylvania astrophysicist Bhuvnesh Jain, the nature of gravity is the question of a lifetime. As scientists have been able to see farther and deeper into the universe, the laws of gravity have been revealed to be under the influence of an unexplained force.

By innovatively analyzing a well-studied class of stars in nearby galaxies, Jain and his colleagues — Vinu Vikram, Anna Cabre and Joseph Clampitt at Penn and Jeremy Sakstein at the University of Cambridge — have produced new findings that narrow down the possibilities of what this force could be. Their findings, published on the Arxiv, are a vindication of Einstein’s theory of gravity. Having survived a century of tests in the solar system, it has passed this new test in galaxies beyond our own as well. . . . Read Complete Report