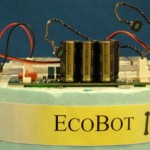 Today’s robots that fly, jump or roll around must refuel or recharge as does any gadget that runs out of energy. Tomorrow’s new generation of self-sustaining robots might keep going nearly forever by grazing on dead insects, rotting plant matter or even human waste.

The vision of robots capable of plugging themselves into the natural world of living organisms has begun taking shape in several labs around the world, and even NASA has shown renewed interest in powering space robots with microbes. But one British lab has already been building on the work of robotics pioneers to create small “EcoBots” that extract energy from microbial fuel cells since 2002. . . . Read complete post