Unsolved Mysteries: Billy the Kid, Brushy Bill Roberts one in the same? (2 videos) 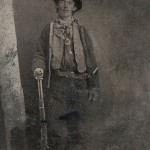 The legend of Billy the Kid is one that every young boy learns at an early age. “He killed 21 men, one for every year of his age and was finally done in by his friend Pat Garrett.” But is that the truth. What about Bushy Bill Roberts claim that he was the true Billy the Kid. Did Pat Garrett, called “Big Casino” by his friend Billy the Kid who he called “Little Casino”?  Many think there is a conspiracy here perpetrated by the two friends. What do you think?. . . . EDITOR