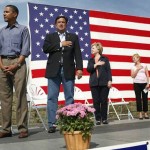 The Communist Party USA isn’t always happy with the Democrats, but in the 2012 election, its chairman says, the best bet for advancing the Party’s goals is to back Barack Obama.

In a report called “Defeating the Rightwing on the Road to Socialism” delivered to the CPUSA annual conference, Party Chairman Sam Webb moved to squash sentiments that disgruntled communists should jump off the Democrat ship and back a third-party candidate for president.

“Some think the Democrats are as bad as the Republicans. Others go further and say that the Democrats are worse because they create popular illusions that change is possible within the two-party system,” Webb said. “And finally there are advocates of running a third-party presidential candidate in this election. . . . Read Complete Report
Category: Eyeballin' the One World Order / Tags: communist party, CPUSA, Obama, socialism
Site built and maintained by Possum Holler Studios