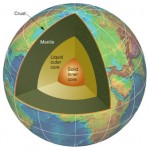 When it comes to Earth’s rotation, you might think geophysicists have pretty much everything figured out. Not quite. In order to explain some variations in the way our planet spins, Earth’s mantle—the layer of hot, softened rock that lies between the crust and core—must conduct electricity, an ability that the mantle as we know it shouldn’t have. Now, a new study finds that iron monoxide, which makes up 9% of the mantle, actually does conduct electricity just like a metal, but only at temperatures and pressures found far beneath the surface. . . . read complete report