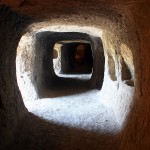 A group of Italian and American archaeologists discovered unique underground pyramid in the town of Orvieto, Italy, says Utro.ru. The constructions carved in volcanic limestone rock were found underneath a wine cellar of a residential house. All lower constructions were completely buried under the ground.

“Within this upper section, which had been modified in modern times and was used as a wine cellar, we noticed a series of ancient stairs carved into the wall. They were clearly of Etruscan construction,” David B. George of the Department of Classics at Saint Anselm said.

During excavations, the scientists discovered that the buildings had a pyramidal shape. In addition, several tunnels were found going far deeper into the cellar. . . . Read complete Report

Orvieto below the surface

The city of Orvieto has always had an intense life in its underground space. Over thousand caves, three thousand years of history under the urban fabric. A destination for fascinating visits and tours.