The Truth about the Anonymous Letter that Shocked the Internet by Claiming that the Music Industry Promoted Gangsta Rap to Fill Prisons. 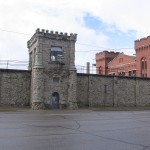 Photo: A view of Tower 7 with Cell block 1 in the background of the Old Montana Prison Source Wikipedia (public domain)

Last month, a controversial anonymous letter entitled “The Secret Meeting That Changed Rap Music and Destroyed a Generation” hit the internet by storm.  The letter, which claims that an unnamed top music industry executive promoted gangsta rap to fill private prisons, was republished by hundreds of blogs and websites, and was reposted on countless forums, Twitter, and Facebook profiles.  Everyone from Public Enemy’s Chuck D to Freeway Ricky Ross had something to say about it. Various YouTube videos were posted to discuss the anonymous letter, and translations of the letter were posted in French, Spanish, and other languages for international audiences. The Huffington Post even published a critique questioning the validity of the claims made by the anonymous author who, fearing for his wellbeing, provided no names or details that might reveal his identity.. . . Read Complete Report