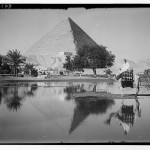 The etching of a starmap centered exactly above Gantenbrink’s Door, in the “airshaft’ running up and away south from the Queen’s Chamber in the great pyramid, depicts some amazing surprises for us all, if we would only do the research. No hieroglyphs here at all; just celestial markings. These markings were NOT purposeless graffiti; because if purposeless graffiti were allowed, then markings would have been found all over the pyramid, and they were not. All facets of the pyramid were aligned to a Northmark – INCLUDING the shaft pointing south – to align that shaft to something different than the true north sky (what everything else was aligned to) would have caused failure in the engineering.

Is there one above the north shaft door? I do not know, because we were in such a rush to drill holes in things, that we failed to follow the scientific method and document the walls, pollen, markings, techniques and patina untouched, first.