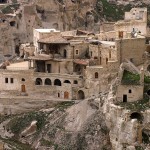 One of the characteristics of Cappadocia is having plenty of underground cities. It’s known that there are more than a hundred of underground settlements in the region and many of them are not open for visits. The underground cities, which are guessed to be used since the Bronze Age, used to be a settlement mostly in Byzantine period, doubtless. In this period, increasing invasions forced local residents to build underground cities for protection and religious purposes. . . . Read Complete Report